CONTARGO was founded in 2004 by Rhenus AG & Co. KG. Contargo concentrated the activities of various Rhenus subsidiaries in the area of container hinterland logistics, and today is one of the biggest suppliers of its kind in Europe. The beginnings of activities go back to 1976. 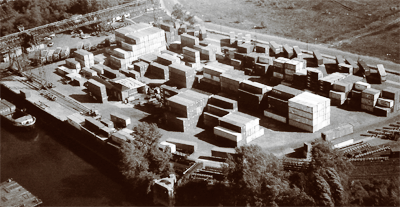 One Contargo predecessor, Combined Container Service, CCS, was among the pioneers of container transport along inland waterways. With its integrated, intermodal service package consisting of container transport by inland barge and truck, plus handling at its own terminals and other auxiliary container services, it opened up a new growth phase for inland shipping.

The Unikai terminal in Wörth, founded in 1977 as a subsidiary of Hapag Lloyd, was taken over in 2004, together with the Unikai agencies in Ottmarsheim and Strasbourg.

The terminal of Alpina in Basel, constructed in 1985, came to Rhenus in 2001 with the takeover of all the activities of the SRN Alpina Group, passing subsequently to Contargo.

Rhenus was also an original shareholder in the Dortmund container terminal, founded in 1989. The terminals in Duisburg-Rheinhausen (2003) and the Kaiserwörthhafen in Ludwigshafen (2004) are the most modern handling depots in Contargo’s network.