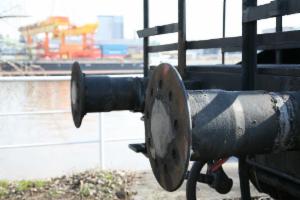 9 December 2015 - The container hinterland network Contargo will be offering a new rail connection between Rotterdam and Frankfurt am Main from January onwards. The Rhine-Main-Rotterdam Shuttle will be starting with a fixed schedule and two round trips per week. Contargo has already been offering this route for several years, and now wants to expand the service with its own line.

"The Rhine-Main-Rotterdam Shuttle is above all a real alternative for time-sensitive import and export transports to and from the Rhine-Main Region", says Andreas Mager, Managing Director of Contargo Industriepark Frankfurt-Höchst GmbH. "As well as the advantageous transit time, stability and eco-friendliness are two additional important arguments in favour of this product."

The first whole train will depart from Rotterdam on 11 January. In Rotterdam the terminals ECT, APMT1, Euromax and RSC will be directly served. There will also be a possibility of accessing APMT2 and RWG, and further deep sea and short sea terminals. Initially the train will run twice weekly as an A-B connection between Rotterdam and Frankfurt; the frequency can be increased to three departures weekly if required. The train will leave Rotterdam every Monday and Thursday, and will depart in the opposite direction on Tuesdays and Fridays from the Contargo Terminal im Industriepark Höchst, Frankfurt am Main.

"The Frankfurt-Rotterdam connection is another significant step in the consistent expansion of rail transports in the Rhine-Main area, taking its place beside the Hamburg-Frankfurt connection which has already been running for more than five years now", says Christian Eichmeier, Managing Director of Contargo Rhein-Main GmbH.

Marketing and customer service for the shuttle will be performed by the Rhein-Main working group consisting of Contargo Terminals Koblenz, Gustavsburg, Frankfurt-West and Frankfurt-Ost. The operator of the train is the Contargo Terminal in Industriepark Höchst, Frankfurt am Main.