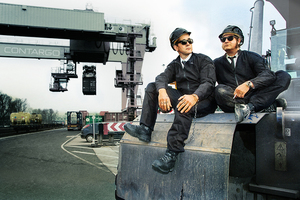 The Contargo Calendar for 2016 – in Blues Brothers style

Tough guys with hearts of gold are the subject of the Contargo Calendar for 2016: two of Contargo’s employees from Frankfurt allowed themselves to be photographed as the “Blues Brothers” in black overalls, black hard hats and sunglasses. The result is an original calendar – not only for logisticians and movie enthusiasts.

Thus the 2016 calendar continues the series of three other “logistic” interpretations by Contargo of famous motifs. The first was the world-famous photo “Lunchtime Atop A Skyscraper”, taken in 1932 during the building of the Rockefeller Center. The interpretation featuring Contargo’s employees can be seen, among other places, adorning our website. The Contargo calendar for 2014 showed Contargo employees on a zebra crossing, modelled on the Beatles cover of the 1969 album “Abbey Road”. In 2015 there followed an interpretation of Edward Hopper‘s oil painting “Nighthawks” from 1942, staged at Contargo Neuss.

If you would also like to have a Contargo Calendar for 2016, send an email with the desired format (wall calendar, spiral-bound desk calendar, or desk pad), plus the delivery address, to: spetermann@contargo.net