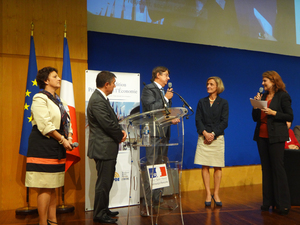 In Paris on 24 September 2015, Contargo North France received the “Demain l'Économie” prize awarded under the aegis of the French Ministry of Economics. This award honoured the cooperation between the government and the logistics enterprise which made it possible for the Contargo-operated Escaut Valenciennes Terminal to become the first French terminal certified as an “Extended Gateway” in February of this year.