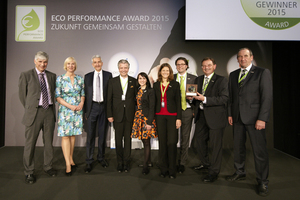 In May this year, Contargo GmbH & Co. KG received the Eco Performance Award for its sustainability concept. Since then the enterprise has gone on to strengthen its three pillars of economy, ecology and social responsibility.

On the eve of the transport logistic 2015 in Munich the Contargo team received the Eco Performance Award, in the form of a mini-biotope. "Contargo greatly impressed us with its integrated concept, the defining of measurable objectives, and their development within the framework of a long- term business strategy", said Dr. Wolfgang Stölzle, Professor at the University of St. Gallen and Chairman of the EPA Jury, speaking of the jury’s decision. Der Eco Performance Award is presented annually by DKV Euro Service in conjunction with its premium partners Knorr-Bremse and the PTV Group, as well as the University of St. Gallen.

"We are delighted that our long-standing commitment to the topic of sustainability has been honoured by this prize, bringing it recognition which we feel it deserves", commented Kristin Kahl, Sales and Sustainable Solutions Manager at Contargo. The prize is regarded by Contargo more as an incentive than as a reason to rest on its laurels. This is demonstrated by many projects which have been initiated since the award. For instance, June saw the start of the fifth round of the cycling-to-work competition "Contargo Gets on its Bike". This year the competition lasted for three months, in order to take all the teams’ possible holiday periods into account. Also for the first time customers of Contargo were invited to join in. In the first four rounds alone Contargo’s employees saved a total of more than 2.2 tons of CO2 in the course of the competition.

In July Contargo appointed the first holder of the newly-created central function of Regional Energy Management Officer. In future, Frank Weisbecker will have the job of helping to ensure that Contargo generates less CO2. He will be responsible for building up the energy management system and for implementing applicable standards at Contargo’s locations and in the holding company. He will provide relevant training for local managers and especially for energy management personnel at the individual terminals. The Regional Energy Management Officer acts as an internal auditor. Frank Weisbecker will report directly to the board of management and make recommendations for improvements.

Contargo has also taken on social commitments: among other projects, Contargo Wörth-Karlsruhe GmbH again participated in a regional aid organisation’s initiative, this year for the benefit of the poor in Sri Lanka. Contargo also supported the "Roparun", a relay run from Hamburg to Rotterdam to benefit children suffering from cancer. Every year Contargo also sponsors various local sports clubs, such as the football clubs SV Büchelberg in Wörth am Rhein and Sparta Rotterdam, and the ice hockey club Adler Mannheim. In addition, Contargo companies supported cultural events such as Karlsruhe’s "Hafenkulturfest" and the Culture Summer ("Kultursommer") in Ginsheim-Gustavsburg.