Gilbert Bredel has been in charge at Contargo Container Escaut Ser-vice, CCES, in Valenciennes for three years

Valenciennes, 15 August 2011: Once containers reach Europe after their ocean travels, their way to their final destination through the so-called “hinterland” begins. This is the field of activity of logistics specialists such as the “Contargo Container Escaut Service, CCES” in Valenciennes, North West France. For three years now, this subsidiary of the Duisburg-based Contargo Group has been successfully managed by Gilbert Bredel (51).

When someone in Bredel’s position gives impulses for the development of trimodal transport in North West France, some maritime experience is definitely helpful. Bredel holds a Captain’s Certificate and began his professional career as a quartermaster and technical officer. After working for a time as operations manager for a sea carrier in Paris, he then went to work for a rail operator, eventually becoming a senior executive in the company.

In March 2008, Bredel became Managing Director of CCES in Valenciennes. The company was founded in 1996, with the local logistics firm Escofi SARL and Contargo subsidiary Combined Container Service GmbH & Co. KG (CCS) participating equally. CCES offers comprehensive services in container hinter-land transport at its terminal facilities in Prouvy and St. Saulve near Valen-ciennes. Regular scheduled services of Contargo’s own barge lines link the region with Dunkirk, Antwerp and Rotterdam via the Franco-Belgian canal system. Today the company has an annual throughput of 70,000 TEU, meaning that it handles approximately 70 % of regional container transports by inland barge. Bredel is also a member of the board of the enterprise “Lille Dourges Container Terminal”, in which Contargo also participates. One of Bredel’s first challenges in his new capacity was to organise the takeover of CCES co-founder Escofi’s share by Contargo in August 2008.

“Captain” Bredel has every reason to be optimistic. The winds of economic change are stirring briskly in this region of North West France, too. The growing interest shown by shippers in environmentally friendly transport modes is creating an increasing demand for barge transports. CCES has reacted by enlarging its capacities. “No two days are alike in this job,” Bredel comments, with obvious enjoyment. Besides well-founded expert knowledge, his task often calls for diplomatic skills. Bredel maintains neighbourly relations especially with representatives of communes and policy-makers – contacts which are very important in the development of transports and new terminals.

After nearly 20 years in the never-resting metropolis of Paris, Bredel is enjoying life in Valenciennes. An enthusiastic yachtsman in his leisure time, he has made his home near the Escaut and appreciates the wonderful view: “From my terrace I can see the container ships go by.” 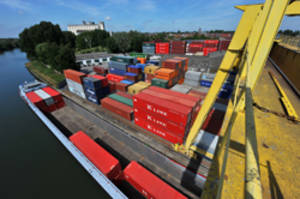 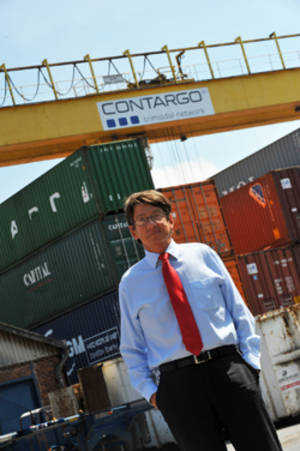