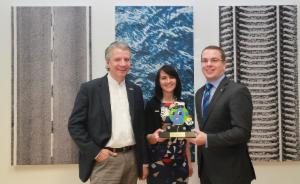 In March Contargo received the “Captain Eco Award 2015” from NYK Line GmbH for its convincing sustainability concept. The company has also implemented some other sustainable ideas over the last few months.

In Neuss, two new reach stackers are helping to save energy. Thanks to their use of AdBlue technology, the vehicles use less fuel and emit 90 percent less nitrogen oxide than other comparable reach stackers. At the Duisburg Intermodal Terminal, Contargo uses a hybrid reach stacker. The heavy duty lift truck, with a lifting capacity of 45 metric tons, cuts fuel consumption and emissions by at least 30 percent compared to an equivalent diesel model.

Last year Contargo Rhein-Neckar GmbH and its employees again made a donation to the children’s hospice “Sterntaler” in Mannheim. To encourage their colleagues to give generously, some members of staff sold cakes and waffles, with the proceeds being donated. In this way an amount was collected which the management rounded up to 1,500 Euro.

In November 2015, Contargo Wörth-Karlsruhe GmbH provided a container for an aid transport project to Sri Lanka, and financed the transport from Wörth to the collecting point in Karlsruhe and back. When the aid supplies and equipment had been distributed to people in need, the container itself also found a new purpose in life: it’s now doing duty as a school canteen at Anagarika Dharmapala Central College.