Automation at the Terminal

A few weeks ago, Contargo put a new Terminal Operating System (TOS) into operation at the Ports de Valenciennes container terminal. It is one of the first inland terminals in France to have a comprehensive IT system.

As the operator of the container terminal at Bruay-sur-Escaut/Saint-Saulve near Valenciennes, Contargo makes continuous improvements both in equipment and information systems. The COLA system (Contargo Open Logistics Apps) developed by Contargo, which is already in use at several of Contargo‘s inland terminals in Germany, has now been introduced at the Group’s terminal in France. The system, consisting of various apps, enables the automation of all management processes at the terminal. It enhances safety and security by increasing the reliability of data exchanged between the terminal and the various actors in the transport chain during container transit.

Applications that have already been put into operation include the automation of truck handling at the terminal, the "Barge/Train" process used for the loading and unloading of containers, and the 3D management of the container park, which shows the position of each container in the terminal in real time.

“We have been waiting for this TOS management system, which has already proved itself at Contargo, in order to further improve overall productivity at the terminal in Valenciennes. We have already noticed a difference in the speed of truck handling – trucks are now completing all the necessary processes at the terminal in less than 15 minutes. The system also enables us to optimise the storage of containers and speed up the handling of barges”, says Gilbert Bredel, Managing Director of Contargo North France.

Here you can view a video showing the truck handling process: https://youtu.be/DHdoMgHJmd0

With an annual transport volume of 2.1 million TEU, Contargo is one of the largest container logistics networks in Europe. Contargo integrates container transport between the western seaports, the German North Sea ports and the European hinterland. Contargo has 24 container terminals at its disposal in Germany, France and Switzerland and additional locations in Germany, the Netherlands, Belgium and Poland. The enterprise also operates its own barge and rail lines. In 2021 the workforce of 1,200 employees achieved a turnover of 566 million Euro. www.contargo.net 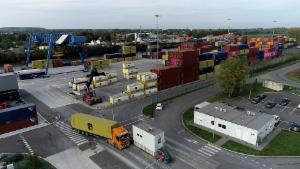 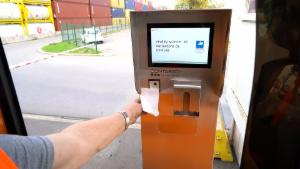