Considering both direct and indirect emissions

On 27 October, container hinterland logistics network Contargo received the Global Transition Award 2022 at a festive award ceremony. The prize, which was awarded for the first time this year, honours enterprises for their decarbonising strategies aimed at making a substantial contribution to attaining the 1.5°C target.

As well as Contargo four other enterprises received awards, in the categories Transition Pioneer and Transition Enabler, plus a special award.

Contargo was assessed as a Transition Pioneer by the jury, who were positively impressed by the fact “that in setting its targets, the enterprise takes account of the indirect emissions in its supply chain, and the targets are ambitious enough to bring the enterprise as a whole onto a path compatible with the Paris Agreement.”

The jury’s statement continued: “In a sector where decarbonising is a difficult task, Contargo has taken up the challenge and is investing early on in its own transition. Innovative technologies are piloted, evaluated and if successful, a roll-out is implemented at other locations. In pursuing this course the enterprise makes a valuable contribution to developing climate protection innovations, and reduces its dependence on fossil fuels. Climate strategy is a fixed element of the corporate strategy at Contargo, and aims to differentiate it from competitors.”

As well as much praise, the award-winner received an indication of how the strategy could be integrated still further into the enterprise’s team structures. Jürgen Albersmann, Managing Director Contargo GmbH & Co. KG, says: “Of course, we are overjoyed at this wonderful award for our efforts so far on the way to decarbonising – but we are just as thankful for the suggestion to build climate performance into remuneration structure and into targets for managers and employees.”

Since 2019 Contargo has been testing fully-electric 44-ton trucks in local transport, and since 2020 has participated in a test for hybrid trucks with overhead lines (catenary technology) on a section of the A5 in Hesse that was electrified in 2019 in the ELISA project with the help of Hessen Mobil. Every two years, the enterprise documents these and other strategies on the way to decarbonising in its Sustainability Report. More information at: https://www.contargo.net/en/company/sustainability/.

With an annual transport volume of 2.1 million TEU, Contargo is one of the largest container logistics networks in Europe. Contargo integrates container transport between the western seaports, the German North Sea ports and the European hinterland. Contargo has 24 container terminals at its disposal in Germany, France and Switzerland and additional locations in Germany, the Netherlands, Belgium and Poland. The enterprise also operates its own barge and rail lines. In 2021 the workforce of 1,200 employees achieved a turnover of 566 million Euro. www.contargo.net 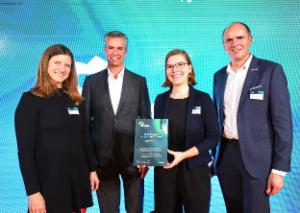