Terminal extension in the port of Voerde-Emmelsum

In addition to the existing terminal, Contargo is to take on another 11,000 m2 area in the port of Voerde-Emmelsum from DeltaPort – the container terminal extension is to be completed by 2025.

Contargo GmbH & Co. KG has won a Europe-wide call for tender by DeltaPort GmbH & Co. KG for an additional area in the port of Voerde-Emmelsum. In the next few years the 11,000 m2 site, situated next to Contargo’s existing terminal, will enlarge the present premises and extend the quay length by a further 130 metres. By doing this, Contargo wants to expand its services in the Lower Rhine and northern Ruhr area, keeping pace with the development of the logistics location initiated by DeltaPort, with large-scale settlement of companies and the resultant increase in handling volumes in the port of Voerde-Emmelsum and the Rhine-Lippe port of Wesel.

Thanks to the settlement – already arranged in contracts – of well-known logistics enterprises on an area totalling approximately 300,000 m2, the logistics location in the port of Voerde-Emmelsum and the Rhine-Lippe port of Wesel will be expanded over the next few years and around 500 additional jobs will be created in the region.   “Marketing of the available space is progressing well, and will soon be concluded”, emphasises Andreas Stolte, Managing Director DeltaPort GmbH & Co. KG. “Integrated logistics concepts for customers are one of the port’s main advantages.”  The trimodality of the port, and the short distances to the logistics companies, will make a significant contribution to environmental protection. “For this reason we welcome the takeover of the additional site and the expansion of the container terminal by Contargo. The development of warehousing and distribution centres presupposes a parallel development of port handling facilities”, Stolte adds.

Expansion of the service offer

Contargo has been successfully operating the container terminal in the port of Voerde-Emmelsum since 2017. “Participation in the call for tender and expansion of the terminal were steps that clearly made sense in view of DeltaPort’s initiative to promote the port as a location for many new import- and export-oriented warehousing services”, says Jürgen Albersmann, Managing Director of Contargo GmbH & Co. KG. “We will be investing around 15 million Euros in expanding and improving the terminal’s handling capacity. Measures will include a second high-performance crane.”

The company operating the terminal, Contargo Rhein-Waal-Lippe GmbH, has been organising integrated container logistics by barge and rail for customers in the Lower Rhine and northern Ruhr area since 2017. “Building up the terminal will mean that we can considerably expand the service we offer our customers. In future, it will be possible to handle two barges plus a block train at the terminal in parallel. These are ideal conditions for so-called hub transports”, says Sascha Noreika, Managing Director of Contargo Rhein-Waal-Lippe GmbH.

Enlarging the terminal will not only favour the expansion of hub transports. Additional storage space for 800 more containers will soon be available. There will also be a fleet with electric trucks.. “Today, sustainability is an important topic”, says Sascha Noreika. “We at Contargo we have been actively committed to sustainability for many years now, for instance with our trimodal transport offer and the possibility of using electrically-powered trucks instead of diesel trucks for delivery. This enables our customers to use CO2-neutral transport.”

With an annual transport volume of 2.1 million TEU, Contargo is one of the largest container logistics networks in Europe. Contargo integrates container transport between the western seaports, the German North Sea ports and the European hinterland. Contargo has 25 container terminals at its disposal in Germany, France and Switzerland and additional locations in Germany, the Netherlands, Belgium and Poland. The enterprise also operates its own barge and rail lines. In 2021 the workforce of 1,200 employees achieved a turnover of 566 million Euro.

Founded at the beginning of 2018, DeltaPort Niederrheinhäfen is an alliance of the DeltaPort ports Wesel/Voerde (consisting of Rhein-Lippe port Wesel, city port Wesel, port of Voerde-Emmelsum), the port of Emmerich, and the NIAG port in Rheinberg-Orsoy. The purpose of the alliance is to strengthen the inland ports on the Lower Rhine. Together, the partners have a complete portfolio ranging from bulk goods, break bulk and heavy cargo to liquid goods and containerized goods. The DeltaPort Niederrheinhäfen alliance benefits from its trimodal infrastructure, its geographically very favourable situation – near the international seaports of Amsterdam, Rotterdam and Antwerp, and also bordering on the densely populated Ruhr and Cologne metropolitan areas. It also has the advantage of available settlement sites, great development potential, a flexible administrative structure and close relationships to its customers. With participation in lighthouse projects like EcoPort 813 and the IHATEC promotion programme for innovative port technologies, the alliance sets standards for sustainability and digitalisation. 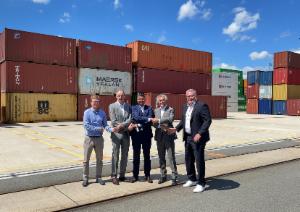