Contargo North France accelerates the supply chain to and from China

For more than a year now, containers from China have been arriving at the French terminal. These are brought to Duisburg by rail via the New Silk Road and then sent on to Valenciennes by barge. Here Contargo can complete the customs formalities directly, thanks to its own customs warehouse. Now the enterprise is also offering exports to China from Valenciennes.

The Escaut Valenciennes Terminal operated by Contargo, situated at the quayside of Bruay-sur-l'Escaut/Saint-Saulve near Valenciennes, is one of the most recent players on the Silk Road between China and Europe. For over a year now Contargo has been offering an alternative route there, combining rail and barge transport. The containers reach Northern France after being transferred from rail to barge at the Duisburg Intermodal Terminal. From now on, French shippers will also be able to have their containers transported to China via Valenciennes.

The overland transport of containers represents serious competition for the sea route, since the journey over land take only half as long as by sea – an advantage that is all the more significant in view of the present disruption of international supply chains. Containers from China reach Valenciennes in less than 20 days. There, Contargo North France can perform all customs formalities for the end customer in France straight away, thanks to its customs warehouse approved by the French customs authorities. Thus a few hours after unloading, the containers have already passed through customs and are available for collection or delivery.

“Together with our colleagues from the other Contargo units and our Chinese and European partners, we have implemented a relevant and competitive transport offer between China and Europe. This fills a need of several big importers in our region”, says Gilbert Bredel, Managing Director of Contargo North France.

With an annual transport volume of 2.1 million TEU, Contargo is one of the largest container logistics networks in Europe. Contargo integrates container transport between the western seaports, the German North Sea ports and the European hinterland. Contargo has 25 container terminals at its disposal in Germany, France and Switzerland and additional locations in Germany, the Netherlands, Belgium and Poland. The enterprise also operates its own barge and rail lines. In 2020 the workforce of 1,158 employees achieved a turnover of 513 million Euro. 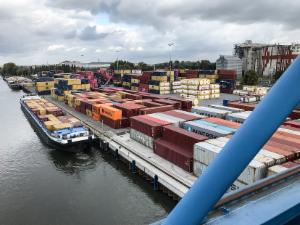