At the beginning of April, a goods train from the Chinese provincial capital Jinan arrived for the first time at the container terminal of Contargo Industriepark Frankfurt-Höchst. This means that the Frankfurt region is now connected to the “New Silk Road”. Following this premiere, Contargo expects more direct trains from China.

Transport by rail between the city of Jinan and Frankfurt am Main takes from 18 to 20 days. The first train of railway operator FELB, with 44 40-foot containers carrying consumer goods from China, arrived punctually on 3 April at Contargo’s terminal in Industriepark Frankfurt-Höchst. The company took on the handling of the containers and their local transport to customers.

“At last the Rhine-Main Region is connected to the New Silk Road”, comments Kawus Khederzadeh, Managing Director, Contargo Industriepark Frankfurt-Höchst GmbH. “In the present situation, where many seagoing ships from the Far East are overbooked and barges in the western seaports often have to wait a long time for handling, where sea freight prices have risen enormously, and containers at the seaports are in short supply, some of our customers are looking for an alternative. This is all the more urgent since the tailback in the Suez Canal will result in more overloading of port facilities and the transport infrastructure in the coming weeks. So it is a good time to transfer to rail transport.”

After the “maiden voyage” of the first test train, goods trains from Jinan are expected to arrive two to three times a month at the terminal in Frankfurt – but they will not be the only ones: in the next few weeks, additional trains from various different regions of China are expected in Frankfurt.

With an annual transport volume of 2.1 million TEU, Contargo is one of the largest container logistics networks in Europe. Contargo integrates container transport between the western seaports, the German North Sea ports and the European hinterland. The enterprise has 24 container terminals at its disposal in Germany, France and Switzerland and maintains offices at seven additional locations in Germany, the Netherlands and Belgium. Contargo also operates its own barge and rail lines. In 2020 the workforce of 1,158 employees achieved a turnover of 513 million Euro. 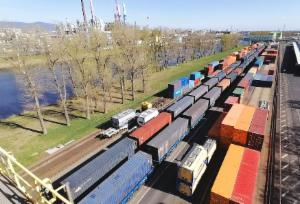