First barge at the terminal in northern France

Valenciennes, 2 February 2021 – Today for the first time, Contargo unloaded containers at the terminal in Valenciennes that had arrived in Duisburg two days previously by rail from China. The containers were then transported to France on a barge operated by Contargo. The whole journey of the approximately forty 40-foot containers via this route from China to France took less than 20 days.

The sea containers, destined for the French market, were loaded at two terminals in the Port of Duisburg. The containers travelled from Duisburg to northern France on a barge of the type Grand Rhine, 110 metres long and 11.40 metres wide, with a total capacity of 104 TEU. The terminal operated by Contargo in Valenciennes is the only one in the Hauts-de-France region that is able to handle barges of this type.

The transport time from Duisburg to Valenciennes by barge was 60 hours. The total journey time of the containers was less than 20 days – half the time required for the sea route.

This new barge service enables various terminals in Duisburg to consolidate containers destined for the French market, which arrive every week from China in about thirty trains.

“With the Corona crisis and its impacts on the international transport of goods, rail container transport between China and Europe developed strongly in 2020, with Duisburg as the hub for final distribution to all European countries. This first round trip by inland waterway between the Port of Duisburg and Valenciennes puts the terminal on the schedules for the New Silk Road, and offers new opportunities to enterprises in our region”, says Gilbert Bredel, Managing Director of Contargo North France.

With an annual transport volume of 2.1 million TEU, Contargo is one of the largest container logistics networks in Europe. Contargo integrates container transport between the western seaports, the German North Sea ports and the European hinterland. The enterprise has 24 container terminals at its disposal in Germany, France and Switzerland and maintains offices at seven additional locations in Germany, the Netherlands and Belgium. Contargo also operates its own barge and rail lines. In 2019 the workforce of 1,205 employees achieved a turnover of 525 million Euro. 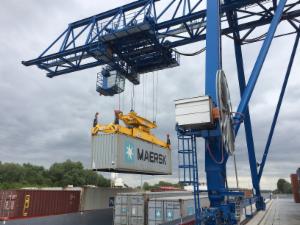