Change of scene in Belgium

Antwerp, 17 October 2019 – As of now, the container service provider Transbox United will trade under the name “Contargo Transbox”. This name change underlines the company’s embedment in the European hinterland network of the Contargo Group.

“Two years ago we took over the remaining shares of United Container Transport in the joint venture Transbox United”, says Michel van Meurs, Regional Sales Manager Western Seaports. “Since then, we have further developed our services in Belgium, and integrated them into the Contargo network. Now the time is right to visibly represent this fact with a unified company name.”

Contargo Waterway Logistics has been active in the Benelux market under the brand name Transbox since 2010. In 2014, together with United Container Transport, the enterprise founded Transbox United as a joint venture, offering various services in the area of container transport by barge. These include daily intra-port transports in the Port of Antwerp serving all the major Antwerp terminals, daily departures between Rotterdam and Antwerp to and from all major terminals, and intra-port transports in the Port of Rotterdam. As an independent service provider, the team of Contargo Transbox also provides services to Deurne and Wielsbeke in Belgium, and to Valenciennes in France. 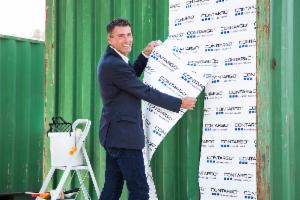