Contargo prepares for the next extreme summer

Zwijndrecht, 22 July 2019 – June 2019 was the hottest June on record since the collection of weather statistics first began in 1881. A sign that – as in 2018 – we might be in for another long, hot summer, with weeks of drought and low water on the Rhine. Since autumn 2018, container hinterland logistics network Contargo has taken the precautionary measure of having four barges in its fleet modified so that they have 10-15 cm more water beneath the keel in very low water conditions.

“We use barges for about 75 percent of our container transports”, says Cok Vinke, Managing Director Contargo Waterway Logistics. “Periods of very low water like those we experienced last year lead to big reductions of the amounts that can be transported, and extra costs due to the purchase of additional tonnage and other transport capacities.”

For this reason, in 2018 Contargo began to have modifications made to some of its contracted vessels.  At two boatyards in Antwerp and Dordrecht, metal plates have been welded onto four vessels  in such a way that they now have to sit only 130 cm instead of 150 cm deep in order for their propellers to have enough water. Thanks to this investment of approximately 10,000 euro per vessel, the barges can now sail in the same water levels with 10-15 cm more water beneath the keel, and can thus transport 200-300 tons more cargo in low water.

This also means that in low water conditions, water no longer needs to be carried in the rear ballast tanks. Thus even with very low water levels, the barges can navigate the shallowest point at Kaub.

“Water levels in the Rhine have always been subject to seasonal fluctuations. However, in the interests of the transport industry and climate protection, goods transport by inland waterway needs to be strengthened. For this reason public policy must take the initiative and act as soon as possible to remove existing bottlenecks. In the current Federal Transport Infrastructure Plan, draft optimisation of navigation channels in the Middle Rhine is addressed as a priority need. We hope this will be implemented as soon as possible”, says Cok Vinke. 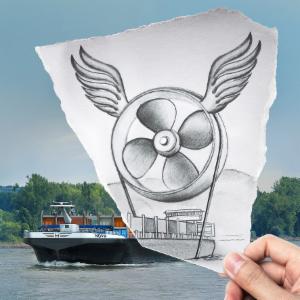