Munich, 4 June 2019 – In the run-up to the transport logistic in Munich, container hinterland network Contargo and Dutch truck manufacturer DAF have been awarded the “Green Truck Logistic Solution 2019”. This environmental prize went to the electric truck CF Electric by DAF, which Contargo has been operating since
May in local transport runs – the first enterprise in Germany to do so.

The first of two DAF CF Electric semi-trailer tractors was received by Contargo on 6 May 2019. The vehicle is being made available to Contargo by Rhenus Trucking as a service provider. The electric truck will be used at DIT Duisburg Intermodal Terminal for the delivery and collection of containers at a wide variety of loading points.

The truck has a permissible total weight of 37 metric tons and a fully electric drive using E-Power Technology by VDL. The heart of the system is a 210 kW electric motor driven by a lithium-ion rechargeable battery with a total capacity of 170 kWh. Depending on the weight of the load, the CF Electric has a range of up to 100 kilometres.

“We regard this prize as recognition of the willingness to operate a truck before it goes into serial production, and cooperate on its optimisation”, says Heinrich Kerstgens, Co-Managing Director of Contargo GmbH & Co. KG. “This is a pioneering step which future users will benefit from. At Contargo we aim to be decarbonised on land and water by 2050 at the latest. To achieve this goal we are testing out a variety of different drive types.”

Sascha Hähnke, Managing Director of Rhenus Trucking, says: “What a success! The first of the six electric trucks we are making available to Contargo as service providers has already received the distinction of the ‘Green Truck Logistic Solution’ award. This represents a validation of our strategy in building up the first battery-powered truck fleet in Germany, and shows that this technology can also be used in heavyduty transport.”

Richard Zink, Director Marketing and Sales and a member of the management board of DAF Trucks, adds: “In future, the electric truck will be a part of the urban scene in Europe. I am very proud that we are now in a position to extend our experience with electric trucks not only in cooperation with big Dutch transport enterprises like Jumbo, Albert Heijn and Tinie Manders, but also outside the Netherlands for the first time, with Rhenus and Contargo. The technological and operative data we gather will flow into the specifications for the final production model, thus ensuring that the vehicles will seamlessly match market requirements.”

Editor-in-chief of magazines VerkehrsRundschau and TRUCKER Gerhard Grünig explains: “When deciding on the Green Truck Awards, an effective overall concept with clear practical relevance is important”, and he continues: “Regarding the use of the two DAF CF Electric trucks, the jury was convinced by the fact that Contargo was not just trying to launch a lighthouse project for the benefit of media presence, but during a preparatory stage of about two years had conducted a very detailed analysis of whether electromobility is a viable economic proposition in the 44-ton total weight range.”

The “Green Truck” is an environmental award made by Munich-based specialist magazine VerkehrsRundschau and its sister publication TRUCKER, honouring especially environmentally friendly vehicles. In 2019 it is being awarded for the ninth time to energy-saving vehicles with the lowest pollutant emissions in various categories. 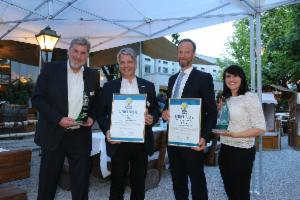