Exemplary Terminal on the Lower Rhine

Neuss, 21 September 2018 – On 21 September 2018 Contargo Neuss GmbH celebrates the official opening of its enlarged and modernised terminal in the Flosshafenstrasse. The trimodal terminal will become one of the handling hubs of the Contargo Group along the Rhine.

Contargo has completed the expansion project within less than two years, without interrupting terminal operations. The area of the terminal is almost three times larger than before: now that construction is completed, the Contargo ter­minal has been extended by an additional area of 52,000 m2 to the north and south of the original site, so that a total of 84,000 m2 is now available for trimodal container handling.

At the same time the infrastructure was developed: two new cranes were installed, meaning that now altogether in Neuss five portal cranes are available for container handling (two at the auxiliary site in the Tilsiterstrasse). The length of the sidings was increased to 1,400 m, enabling two block trains to be handled simultaneously. Construction also included a new administration building and a new handling building, 17 pre-stacking places for trucks and 106 parking places for cars. Handling capacity at the terminal has thus been doubled, now amounting to 200,000 containers.

Handling hub on the Lower Rhine

These construction measures were a prerequisite for Neuss to be used in future as a hub of the Contargo Group for the seaports of Rotterdam and Antwerp. Due to the long waiting times for barges in both ports,  for some time now Contargo has only been calling at the larger seaport terminals, in order to speed up the circulation of its barges. For this reason, containers from Contargo’s other terminal locations will be consolidated at Neuss in future.

Neuss is now not only one of the largest terminals within the Contargo Group, but also one of the most modern. The additional space for truck transports and the optimised check-in and check-out processes will help to free up the roads in the port. OCR gates, a drive-by kiosk and self-check-in at the gatehouse, in combination with Contargo’s own self-developed software, will help to halve truck throughput times at the terminal.

With an annual transport volume of 2.2 million TEU, Contargo is one of the largest container logistics networks in Europe. Contargo integrates container transport between the western seaports, the German North Sea ports and the European hinterland. The enterprise has 24 container terminals at its disposal in Germany, France and Switzerland and maintains offices at seven additional locations in Germany, the Netherlands and Belgium. Contargo also operates its own barge and rail lines. In 2017 the workforce of 996 employees achieved a turnover of 471 million Euro. 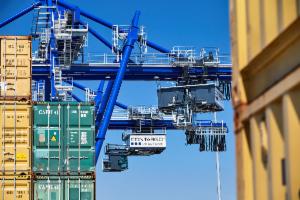