From 1 July Jürgen Albersmann will be responsible within the Contargo management for the Group’s own terminal activities, as well as the areas of corporate technics, safety and procurement.

After studying economics Albersmann began his professional career in 1998 with the Hellmann Worldwide Logistics group in Osnabrück. In 2003 he changed to the Deutsche Bahn AG, where he first acted as Key Account Manager for large companies in the coal and steel industry. In parallel he took an Executive MBA study course at the University of St. Gallen, subsequently switching to the central strategy department, where his last post was Head of Business Development in India. From 2009 to 2013 Albersmann occupied an executive position with the Duisburger Hafen AG and then changed to Contargo Neuss, where he was responsible for amalgamating and expanding terminal activities at the Neuss location.

Qualified logistics specialist Fischer joined the management board of Contargo in 2012. Previous to this he worked in various capacities at several Rhenania locations. In 1987 he took on the management of Rhenania’s Mannheim container terminal and from 1996 held general responsibility for all intermodal activities at the Mannheim location. After giving up his position as Managing Director of the Holding, Fischer will stay on initially as Managing Director of Contargo Rhein-Neckar GmbH.

With an annual transport volume of 2.2 million TEU, Contargo is one of the largest container logistics networks in Europe. Contargo integrates container transport between the western seaports, the German North Sea ports and the European hinterland. The enterprise has 24 container terminals at its disposal in Germany, France and Switzerland and maintains offices at seven additional locations in Germany, the Netherlands and Belgium. Contargo also operates its own barge and rail lines. In 2017 the workforce of 996 employees achieved a turnover of 471 million Euro. 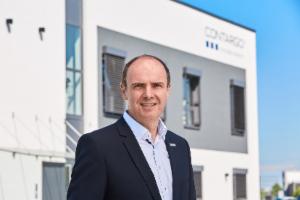