More rail transport in the hinterland

Duisburg, 14 February 2018 – As of now, Contargo Rail Services GmbH is also offering its comprehensive services for the rail transport of goods at a newly-established Agency and Coordination Point in Duisburg. Here the team takes on classic agency tasks such as the commercial and schedule processing of trains for customers, as well as providing full coordination services for the transports of third parties.

“Agency services are one of the pillars of our enterprise. Until now we have only provided them in the seaports”, says Andreas Mager, Co-Managing Director of Contargo Rail Services GmbH. “Now we are offering these services in the hinterland as well. This offer will be especially advantageous for companies that are centrally organised.”

Initially three CRS employees will be manning the Agency and Coordination Point, which is situated in the office premises of the Duisburg Intermodal Terminal (DIT). They cooperate closely with customers and their service providers, such as rail transport companies.

“We decided on Duisburg as a location for our first branch office, because the world’s largest inland port is also a major hub for rail transports. Here our services are of interest to companies from all over the world”, explains Michael Lückenbach, Co-Managing Director of Contargo Rail Services GmbH. “We have already begun cooperating with the first customers.” 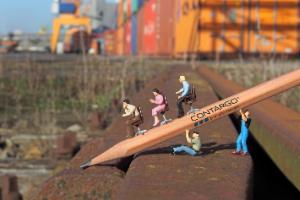