Hof, 18 September 2017 – On 14 September 2017 Contargo Network Logistics GmbH and Ziegler Logistik GmbH founded a joint enterprise, to be held by both companies on a fifty-fifty basis. The joint company, which will have its headquarters in Döhlau, will operate under the name of Contargo Ziegler Combitrac GmbH. In future more frequent departures, increased rail transport capacities, more depot space and more flexible delivery/collection will ensure an ample logistics capacity, especially for the wood industry in Northern Bavaria.

The company will be jointly managed by Stefan Ziegler (Ziegler) and Robert Sebald (Contargo). The joint venture is subject to the approval of the antitrust authorities.

Ziegler Logistik GmbH belongs to the ZIEGLER GROUP, an internationally active, expanding group of companies with its headquarters in Plössberg in the Upper Palatinate (north-east Bavaria). The ZIEGLER GROUP has approximately 700 employees working at five locations. Its activities include operation of the largest sawmill in Europe as well as a multimodal logistics terminal. 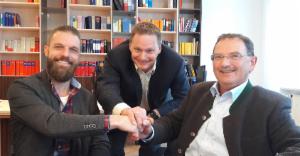