Duisburg, 25 July 2017 – In May 2017 the Duisburg Intermodal Terminal (DIT) put a hybrid reach stacker by Konecranes into operation. Apart from the prototype, which has been operating in Helsingborg for four years now, this is only the second Konecranes hybrid reach stacker in operation worldwide. A third will shortly be delivered to the Contargo Terminal in Emmelsum. DIT expects this machine to reduce both CO2 emissions and costs.

The heavy-load stacker by Konecranes has a lifting capacity of 45 metric tons and consumes at least 30 percent less fuel than a comparable diesel-driven model in normal operation. “We decided in favour of this  machine because it will help to bring us nearer to our sustainability goal of reducing our CO2 emissions by ten percent by 2020”, says Bernd Putens, Managing Director of Duisburg Intermodal Terminal. “We are expecting the machine to perform just as well as diesel-driven reach stackers. Indeed, we expect substantial cost savings in the medium term due to longer maintenance intervals and fewer downtimes.”

In 2013, Konecranes developed the first hybrid reach stacker in the world. The SMV 4531 TB5 HLT now in operation at Contargo has a drive consisting of a diesel engine, an electrical generator and an electric motor for driving. The diesel engine has an engine power of 230 kW and runs at a maximum speed of 1,800 rpm in the optimal consumption range.

The regenerative electric motors provide the power for the drive and the lift system. Braking energy and load lowering energy are fed back into the system and stored for later use, which cuts fuel consumption and substantially reduces the burden on the environment.

The hydraulic pumps of the Hybrid Reach Stacker are electrically driven and electronically controlled. The speed of the pumps, which supply hydraulic energy for lifting and steering, can be controlled independently of the speed of the diesel engine. This enables a much faster response at maximum performance requirement, as well as a lower noise level when the Hybrid Reach Stacker is in driving mode.

At the forefront in resource conservation

At the Duisburg Intermodal Terminal, which is part of the Contargo Group, 10,000 TEU can be stored. The trimodal terminal has two berths for barges and six railway sidings. Four container cranes and seven mobile machines are available for handling. And there is also no lack of sustainable ideas:

In addition, container positions have been optimised so that the whole portal crane does not have to be moved, but as often as possible only the trolley. The crane operators have received training on how to save energy in operation.

The office building, too, has been included in energy saving measures. An LED lighting system has been introduced there, and movement-activated sensors have been installed in some areas to ensure that lights are not left on unnecessarily. The times at which the floodlighting of the terminal is activated are automatically adjusted to the time of year.

Konecranes is a world-leading group of Lifting Businesses™, serving a broad range of customers including manufacturing and process industries, shipyards and ports. It provides innovative lifting solutions that increase productivity, as well as tailored services covering all aspects of lifting equipment. Konecranes has 18,000 employees working at 600 locations in 50 countries. Konecranes Class A shares are listed on the Helsinki stock exchange (Nasdaq Helsinki Ltd) under the symbol KCR1V. 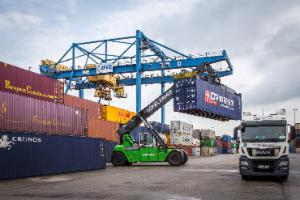