Faster from the Middle Rhine to Rotterdam

Koblenz, 18 January 2017 – The container hinterland network Contargo is further expanding its rail transport offer. As of January this year, the enterprise is offering a new rail connection between Rotterdam and Koblenz. The Koblenz Multimodal Express is starting off with a fixed schedule and two round trips per week.

The Koblenz Multimodal Express set out from Rotterdam for the first time on 12 January 2017. The train will depart regularly from Rotterdam on Mondays and Thursdays, leaving Koblenz on Tuesdays and Fridays on the return trip, and arriving in each case on the following day. In Rotterdam the train will serve the RSC, APMT 1, ECT and Euromax terminals. A connection with the APMT 2, RWG, RST North and South terminals is possible.

“The new product is an alternative to the direct trucking offer. It is almost as fast as trucking, but less expensive”, says Arndt Puderbach, Director of the Contargo terminal in Koblenz. “The Koblenz Multimodal Express is also the ideal complement to combined transport by barge, since for urgent containers it is speed that counts, and when water levels are low we have easier access to additional transport capacities.”

With an annual transport volume of 2.3 million TEU, Contargo is one of the largest container logistics networks in Europe. Contargo integrates container transport between the western seaports, the German North Sea ports and the European hinterland. The enterprise has 24 container terminals at its disposal in Germany, France, Switzerland and the Czech Republic and maintains offices at seven additional locations in Germany, the Netherlands and Belgium. Contargo also operates its own barge and rail lines. In 2015 the workforce of 868 employees achieved a turnover of 405 million Euro. 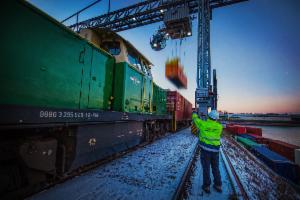