Emmerich, 20 December 2016 – Container hinterland network Contargo is to strengthen its presence on the Lower Rhine. The enterprise is increasing its participation in Rhein-Waal-Terminal, which will operate under the name of Contargo Rhein-Waal-Lippe GmbH. From 1 January 2017 this company will operate the container terminals in Emmerich and Emmelsum. In future, operative management will be the responsibility of Contargo, while the port site and the port infrastructure in Emmerich will remain the property of Port Emmerich Infrastruktur- und Immobilien GmbH.

Until now Contargo held a 37.6 percent interest in Rhein-Waal-Terminal GmbH, with Port Emmerich Infrastruktur- und Immobilien GmbH as the other participant. “This share will now be increased to 50 percent”, said Konrad Fischer, Co-Managing Director of Contargo GmbH & Co. KG.

The Terminal in Emmerich will remain as the main site of the new company. Central tasks like dispatch and sales will be organised from Emmerich for both locations. “For customers, the change of name does not imply any significant changes,” adds Heinrich Kerstgens, Co-Managing Director of Contargo GmbH & Co. KG. “But as part of a strong alliance on the Lower Rhine, Contargo Rhein-Waal-Lippe GmbH can now benefit even more from the extensive network of the Contargo Group, with terminals and offices in six countries.”

Michael Mies and Ralf Gerlach will jointly manage the new company. “In future we can market both locations together”, says Michael Mies. “This will enhance our market presence, and give our customers even more reliability.” Additional manpower for the new tasks has already been recruited in advance of 1 January – because more growth at the location is anticipated: “Expansion of the Emmerich terminal is planned”, says Michael Mies. “A third gantry crane is to be installed on the side facing the port basin.”

The second terminal, in Voerde-Emmelsum, is being enlarged and is due to go into operation at the beginning of 2017. This terminal will also have trimodal connections with water, rail and road. Here, on an area of 46,000 m2, a volume of 60,000 TEU will be handled annually. 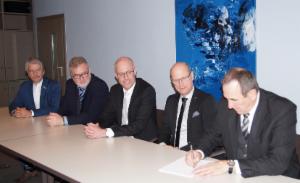