For the first time in the history of navigation on the rivers of the North French basins, the barge Centurion, sailing for Contargo, has transported 84 TEU in three tiers from Bruay-sur-l'Escaut (Escaut Valenciennes Terminal) to Antwerp.

The barge Centurion, which has been part of the Contargo North France fleet for several years, is 105m long and 9.50m wide, and usually transports up to 72 TEU in two tiers between the container terminals in the Valenciennes area and the seaports of Antwerp and Rotterdam.

The test trip, which took place on 11 and 12 July, was able to be realised thanks to upstream feasibility studies carried out by Contargo. The fact that there were heavy containers on board, but no high cube containers, facilitated the changeover to three tiers and ensured freedom of passage beneath bridges with a maximum clearance of 6.10 metres.

“From now on, whenever loading conditions and navigation conditions permit, we will use the third tier to increase our transport capacity. Theoretically our barges will be able to transport up to 117 TEU per trip, or 50 % more again than with two tiers. However, one metre of clearance is missing under the lowest bridges on the Escaut in order to convert this trial run into a feasible, regular arrangement for all types of containers” Gilbert Bredel, Managing Director of Contargo North France, commented. 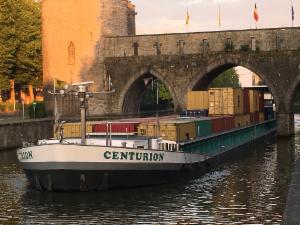