Voerde, 7 December 2015 – With the connection of the on-site power supply on 3 December, Contargo officially began construction work on the terminal in the port of Emmelsum. With the new terminal, the container hinterland logistics network will be taking some of the pressure off its own locations on the Lower Rhine, and will offer industry in the area around the mouth of the river Lippe an easily-accessible multimodal connection with the seaports.

The planned terminal in the port of Emmelsum, situated in the district of the same name in the town of Voerde near the mouth of the Wesel-Datteln Canal, is partly supported by German federal government funding for the promotion of intermodal transport handling facilities. In the next few months depot space for about 1,400 TEU, new access roads, truck and car parking spaces will be built on an initial area of 46,000 m2. New rail tracks will also be laid, and a building to accommodate processing and social facilities will be constructed, as well as a hall for maintenance and repair services.

A bridge crane is already in place from previous use. Contargo will also equip the site with a new reach stacker. When construction work has been completed, the terminal will have a 300-metre quay and two rail modules, each 315 metres long, for the handling of approx. 85,000 TEU. A reefer station will mean that temperature-controlled goods can also be stored and handled in Emmelsum. Further services provided by the terminal will include customs clearance formalities.

“The new terminal will be equipped with state-of-the-art technology”, says Konrad Fischer. “For instance, checking-in and checking-out of truck and rail will be partly automatic. OCR gates will be able to read the number plates and identifications of loading units. And the whole site will be lit with low-cost, ecologically friendly LED lighting.” 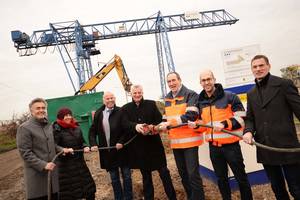