Paris, 29 September 2015 - On 24 September 2015 in Paris, Contargo North France received the “Demain l'Economie” prize awarded under the aegis of the French Ministry of Economics. This award honoured the cooperation between the government and the logistics enterprise which made it possible for the Escaut Valenciennes Terminal operated by Contargo to become, in February of this year, the first French terminal to be certified as an “Extended Gateway”.

With an annual transport volume of 2 million TEU, Contargo is one of the largest container logistics networks in Europe. Contargo integrates container transport between the western seaports, the German North Sea ports and the European hinterland. The enterprise has 25 container terminals at its disposal in Germany, France, Switzerland and the Czech Republic and maintains offices at seven additional locations in Germany, the Netherlands, Belgium and Japan. Contargo also operates its own barge and rail lines. In 2014 the workforce of 800 employees achieved a turnover of 410 million Euro. 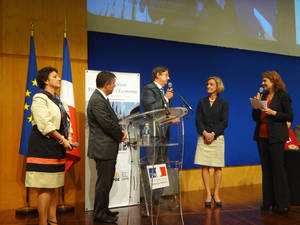