Combined Transport for All

Duisburg, 28. April 2015: On 1 May, the Contargo Group will be making IRIS – its routing calculation system for trucks as pre-carriage and on-carriage in intermodal transport in Europe – available free of charge for free use and development, on the web-based hosting service GitHub. In this way, many people’s input of knowledge and experience can flow into the software, and the program can be continuously adapted to changing background conditions.

IRIS stands for Intermodal Routing Information System, and was initially an element of Contargo’s Tariff Calculation System IMTIS, where IRIS acted as a central broker between IMTIS and Contargo’s own in-house development of OpenStreetMap material, specially designed for use in intermodal transport. IRIS has now been separated from IMTIS. The IRIS program provides users with core information about routes – which routes to take – but other data can also be calculated, such as total kilometres, road toll kilometres, and journey times to plan in. Up to now the program covers Germany and all its neighbouring countries. IRIS takes account of information from the map data such as e.g. maximum permitted weights and toll obligations. When calculating the CO2 emissions of an intermodal transport, the transports by rail and barge as well as the handling and transfer of the container are included.

From 1 May 2015 this software will no longer only be available to registered users via Contargo. IRIS can then be downloaded under AGPLv3 Open Source License at GitHub, and can be further developed by users for their own needs.

“We are increasingly adopting Open Source solutions, because they enable software to be adapted to differing needs,” says Henrik Hanke, IT Manager. “In many applications – for instance a route calculation system – we are not dealing with a field of activity which is completed. The special challenge consists in continuously adapting the software to a continually-changing system. Open Source solutions have the advantage that they can not only be used by many people, but can also be programmed and further developed.”

It is already possible to report first-hand information to Contargo, such as road closures or re-routing, so that they can be entered into the map data and used in IRIS. Over the next few years, Contargo plans to interlink other applications step by step. For instance, for real time routing it is planned to take account of bridge heights in combination with the latest water levels, Rhine closures and rail construction sites.

Over Contargo
With an annual transport volume of 2 million TEU, Contargo is one of the largest container logistics networks in Europe. Contargo integrates container transport between the western seaports, the German North Sea ports and the European hinterland. The enterprise has 25 container terminals at its disposal in Germany, France, Switzerland and the Czech Republic and maintains offices at seven additional locations in Germany, the Netherlands, Belgium and Japan. Contargo also operates its own barge and rail lines. In 2014 the workforce of 800 employees achieved a turnover of 410 million Euro. 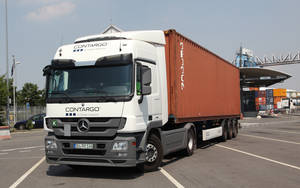