Bruay-sur-l'Escaut, 23 February 2015: Contargo North France, which operates the multimodal Escaut Valenciennes Terminal, has received approval from the Belgian customs authority to become a member of the "Extended Gateway" terminal network of the shipping company MSC Antwerp.

Thanks to an agreement which has been made possible by the cooperation of the relevant customs authorities, MSC containers unloaded in the Port of Ant-werp will now be able to be transported by barge directly to the Escaut Valen-ciennes terminal, without undergoing customs formalities in the seaport. Cus-toms clearance of the containers will then take place in Valenciennes, France. This procedure will save importers both time and costs. If the consignee has authorised customs warehousing, containers will be able to be delivered directly. This does not apply to goods which are subject to veterinary control.

The Escaut Valenciennes Terminal was constructed by Docks Seine Nord Europe / Escaut, and has been operated by Contargo North France since 1 January 2015. With this new container terminal, Contargo offers shippers and forwarders in the region a new infrastructure with an annual handling capacity of 85,000 TEU. The terminal fulfils the requirements of the ISPS standard.

With five round trips per week between the Escaut Valenciennes Terminal and the Port of Antwerp – with a weekly barge transport capacity totalling 500 TEU – Contargo is the leading provider in the Nord-Pas de Calais region for the barge transport of sea containers. The transit time is between 22 and 30 hours, depending on the terminals concerned. Contargo North France also offers transports by truck or barge to other western seaports in Belgium, France and Holland.

About Contargo
With an annual transport volume of 2 million TEU, Contargo is one of the largest container logistics networks in Europe. Contargo integrates container transport between the western seaports, the German North Sea ports and the European hinterland. The enterprise has 25 container terminals at its disposal in Germany, France, Switzerland and the Czech Republic and maintains offices at seven additional locations in Germany, the Netherlands, Belgium and Japan. Contargo also operates its own barge and rail lines. In 2014 the workforce of 800 employees achieved a turnover of 410 million Euro. Further information is available at: www.contargo.net. 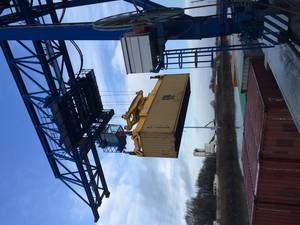