Capacity doubled by addition of a second barge terminal

Duisburg, 1 October 2014. From 1 October 2014, Contargo Neuss GmbH is renting a second terminal in Neuss am Rhein, thus doubling its depot capacity. The company also plans further expansion at the location.

The former Rhenania terminal, later Neuss Trimodal-Terminal, which Contargo will be using from October, has an area of 26,200 m2 with room for 3,000 TEU. Together with the capacities already in use on the Flosshafenstrasse, this will increase Contargo’s total depot area in Neuss to 6,300 TEU. Contargo will now have a total of three cranes and four berths at the two sites. It is expected that initially 100,000 containers will be handled there every year.

Until 30 September, Contargo used the Neuss terminal as a forwarding partner of Neuss Trimodal GmbH. On that date Rhenus, the parent company of the Contargo Group, sold its shares to the other participators (Kombiverkehr, Neuss-Düsseldorfer Häfen and Ambrogio). The sites of Neuss Trimodal GmbH have now been divided into two independent terminals.

And Contargo has yet more expansion plans for Neuss: “By the end of 2016, we plan to almost treble the terminal area on the Flosshafenstrasse”, reveals Konrad Fischer, Co-Managing Director of the Contargo Holding Company also responsible for the Neuss location. “We shall then be operating with five cranes at Neuss, with state-of-the-art technology in the terminals and for truck processing, and we should be able to achieve a transport capacity of more than 150,000 TEU.”

About Contargo
With an annual transport volume of 2 million TEU, Contargo is one of the largest container logistics networks in Europe. Contargo integrates container transport between the western seaports, the German North Sea ports and the European hinterland. The enterprise has 25 container terminals at its disposal in Germany, France, Switzerland and the Czech Republic and maintains offices at seven additional locations in Germany, the Netherlands, Belgium and Japan. Contargo also operates its own barge and rail lines. In 2013 the workforce of 800 employees achieved a turnover of 410 million Euro. 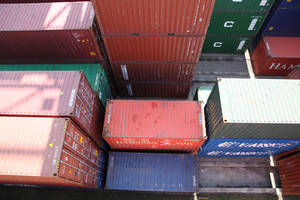