At five different locations, Contargo is supporting the swimming marathon of Professor Andreas Fath in the service of science

Basel, 7 August 2014: The logistics terminal which is usually home to waiting containers saw special company yesterday: Contargo AG, Basel, was host to the “swimming Professor” Andreas Fath of Furtwangen University (HFU) and his team. The Doctor of Chemistry and long-distance swimmer plans to swim the length of the Rhine, from source to estuary, in four weeks, testing the quality of the water on the way for scientific purposes. At five different terminals Contargo will be supporting the “Rheines Wasser” (or “Pure Rhine Water”) project, offering hospitality to the team against a logistic backdrop, providing showers, mooring for the boats and accommodating the motor caravan.

“The ‘Rheines Wasser’ project is very much our kind of project, for three reasons”, says Holger Bochow, Managing Director Contargo AG. “First, because our barges travel from Basel along the same route as the swimmer – so the Rhine is a passion we have in common. Secondly, because the project is concerned with the quality of the water, and environmental protection is one of Contargo’s fundamental principles. And thirdly, because we are sports enthusiasts and appreciate that what Andreas Fath is trying to achieve deserves great respect and merits our support.”

After Basel, the next ‘ports of call’ for the team at Contargo will be in Ludwigshafen (11 August), Koblenz (14 August) and Emmerich (20 August). There the swimmer support team, about 20-strong, will learn details about the importance of the Rhine for logistics. In Rotterdam (23 August) Contargo Zwijndrecht will welcome the team on the Wilhelmina Pier. Over the whole distance between Basel and Rotterdam, Contargo will be informing its barge operators regularly about the current position of the swimmer and his accompanying convoy, so that they can keep a lookout for the sportsman and cheer him on his way.

„Rheines Wasser“
The initiator and central protagonist of the “Rheines Wasser” Project, Andreas Fath, is Professor of Physical and Analytical Chemistry at Furtwangen University (HFU) specialising in ecological engineering. He wishes to use the interest generated by the project to raise public awareness of water as a precious natural resource, and focus attention on the need for effective water pollution prevention. Together with students at Furtwangen University and other partners, Andreas Fath will analyse the daily river water samples from various scientific viewpoints. The long-term objective, following a detailed stocktaking and subsequent cause study, is to develop systems and processes which will break down and remove critical substances such as hormones, antidepressants, sweeteners, antibiotics, medical drugs and microplastics, before they get into our rivers, lakes and oceans.

You will find the latest updates on “Rheines Wasser” at Contargo on Facebook, at: www.facebook.com/Contargo.DE

About Contargo
With an annual transport volume of 2 million TEU, Contargo is one of the largest container logistics networks in Europe. Contargo integrates container transport between the western seaports, the German North Sea ports and the European hinterland. The enterprise has 25 container terminals at its disposal in Germany, France, Switzerland and the Czech Republic and maintains offices at seven additional locations in Germany, the Netherlands, Belgium and Japan. Contargo also operates its own barge and rail lines. In 2013 the workforce of 800 employees achieved a turnover of 410 million Euro. Further information is available at www.contargo.net.

About "Rheines Wasser"
The “Rheines Wasser” Project is a swimming marathon in the service of science and research, with the aim of gathering new information on the quality of water in the Rhine. The project has been made possible by the help of many partners who are supporting it with their scientific know-how, state-of-the-art analysis equipment and financial assistance. Those interested can follow the progress of the project online on the website www.rheines-wasser.eu and on Facebook at www.facebook.com/RheinesWasser. 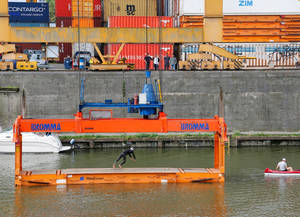 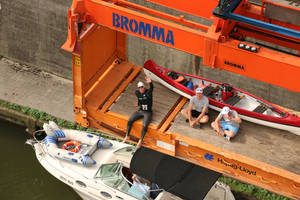 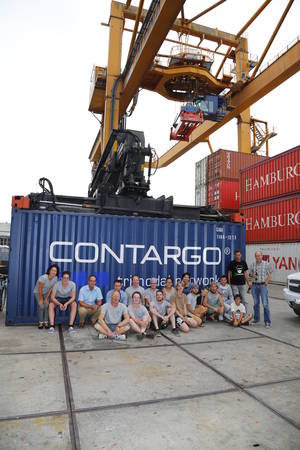