Contargo’s Basel-Multimodal-Express has been combining the advantages of trucks, trains and inland waterway vessels for a year

Duisburg, 28 March 2012: The container logistics specialist Contargo has issued a positive report after operating its Basel-Multimodal-Express services for one year. The company shipped almost 13,500 TEUs using the first trimodal transport link between Basel and the seaports at Rotterdam and Antwerp.

“The Basel-Multimodal-Express offers our customers several benefits at the same time,” says Holger Bochow, Managing Director of Contargo Basel. “It transports the containers safely to Switzerland, we use the flexibility of inland waterway services at the seaports, transportation is safe, it is environmentally-friendly and by using rail services too, we are not dependent on water levels in rivers either.”

Contargo’s Basel-Multimodal-Express (BME) has been connecting Basel to the seaports at Rotterdam and Antwerp with a fixed timetable and two round trips a week since February 2011. The BME combines the advantages of three modes of transport: inland waterway vessels provide the feeder services between the western European ports and Emmerich in Germany. In contrast to direct rail services, they can pick up or deliver the containers directly at all the current seaport terminals in Rotterdam and Antwerp in a flexible way. The trimodal terminal in Emmerich, which is also part of the Contargo network, serves as the hub and interface between inland waterway vessels and rail services. The containers are rapidly transported between Emmerich and Basel by rail overnight. Trucks then provide the final transport services between Basel and hinterland destinations.

“The BME enables us to exploit the benefits of the three modes of transport in the best possible way. If the demand exists, we shall continue to expand this principle,” says Thomas Löffler.

About Contargo:
Contargo has one of the largest container logistics networks in Europe and moves 1.6 million TEUs per annum. Contargo’s business operations cover container traffic between the so-called western ports (Rotterdam, Amsterdam and Antwerp), the German North Sea ports and inland destinations in Europe. The company has 25 container terminals at inland waterway ports in Germany, the Netherlands, France and Switzerland. The company also operates four of its own shipping routes and services on two railway lines. The 800 employees generated turnover of EUR 380 million in 2011. 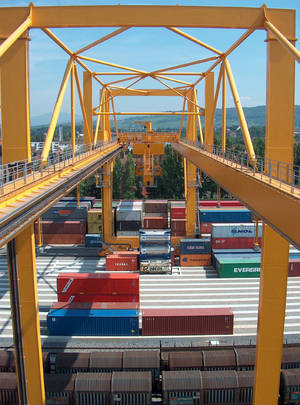 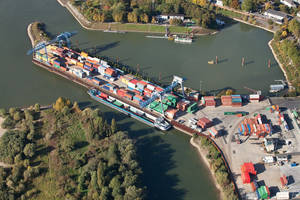