The Geneva Shuttle complements Contargo’s long-established Rhine-Romandie Shuttle (RRS), which has linked the Contargo Terminal in Basel with the partner terminal in Chavornay since 2006. The timetable of the RRS is coordinated with Contargo’s Basel Multimodal Express (BME), which connects Basel with the seaports of Rotterdam and Antwerp, running on a fixed schedule of two round trips per week.

Two weeks after the inauguration of the service Holger Bochow, Managing Director in Basel, is very satisfied. “The new product is an important move in building up our position as the leading integrated service provider on the Upper Rhine”, he comments. “Our service is very popular with our customers. Provided this trend continues, there is a possibility that we may soon be offering an additional weekly round trip on this route.”

About Contargo:
Contargo has one of the largest container logistics networks in Europe and moves 1.6 million TEUs per annum. Contargo’s business operations cover con-tainer traffic between the so-called western ports (Rotterdam, Amsterdam and Antwerp), the German North Sea ports and inland destinations in Europe. The company has 25 container terminals at inland waterway ports in Germany, the Netherlands, France and Switzerland. The company also operates four of its own shipping routes and services on two railway lines. The 800 employees gen-erated turnover of EUR 380 million in 2011. 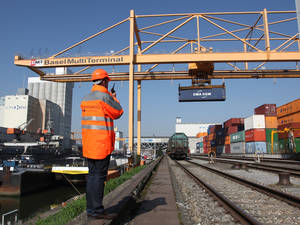