Duisburg, 4.7.2011: Since 18.06.2011 the Duisburg Intermodal Terminal DIT, which is part of the Contargo Network, has become the western bridgehead for the direct container connection “Moscovite”. This rail link was created just over a year ago and since then has made Duisburg an important hub between east and west. Following its changeover to DIT the direct container train, which until now generally made one trip per week, will be departing twice a week for Moscow. “Moscovite” is operated by Trans Eurasia Logistics TEL, a joint venture of the Deutsche Bahn (30 %), Russian Railways (30 %), TransContainer (20 %), Polzug (10 %) and Kombiverkehr (10 %).

To this cooperation Contargo will bring its European network, consisting of its own terminals and scheduled inland barge and rail container transports lines. In Duisburg, this network will ‘funnel’ together flows of goods coming from Basel, Great Britain and the western seaports and destined for Russia or Asia. DIT itself offers ideal conditions for the smooth operation of the “Moscovite”, with its 6 rail sidings, its 250-metre quay for the processing of inland barges, its container depot and repair modules, and its trucking fleet.

Speaking of the cooperation with TEL, DIT Managing Director Bernd Putens says: “We welcome this cooperation and the confidence shown in our terminal. With this linking of Moscow and other CIS destinations to European rail transport, a beginning has been made. Direct connections from China to Duis-burg are already being planned. Thus it is only a matter of time before the safe, reliable and eco-friendly scheduled rail transport of containers from China is possible, too.”

Andre Hempel, responsible for sales and marketing at TEL, says: “In Contargo, TEL has a partner at its side with optimal knowledge of all areas of trimodal transport. Together, we can offer container logistics services from one source which are effective, attractively priced and energy efficient.”

Where speed and security are concerned, rail is the best alternative to direct trucking. A train covers the stretch of approximately 2,200 kilometres between Duisburg and Moscow in 7 days, and is thus the fastest transport mode along this route. Security guards provide additional protection for the transport throughout the journey through the CIS. If desired, TEL will also provide seamless monitoring by GPS for every individual container.

With CO2 emissions of c. 24 grams per tonne/km, trains have an emission value which is two thirds smaller than the carbon footprint of truck transports. This agrees perfectly with Contargo’s philosophy of focusing on transport modes which are sustainable and environmentally friendly.

About Contargo:
With a yearly transport throughput of approximately 1 million TEU, Contargo is one of the biggest container logistics networks in Europe. Contargo integrates container transport between the western seaports, the German North Sea ports and the European hinterland. The company has 18 container terminals at its disposal at inland ports in Germany, the Netherlands, France and Switzerland. Contargo also operates its own inland barge and rail lines. In 2010 its 400 employees achieved an annual turnover of 190 million Euro. 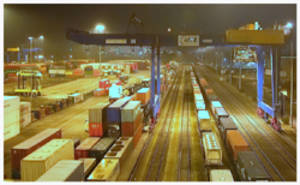