Contargo is one of the leading, neutral service providers for container logistics in the European hinterland. With a close-knit network of its own terminals and transport lines, Contargo links the seaports in Western Europe with the European hinterland. The container specialist combines the inter-system advantages of the transport modes inland barge, rail and truck.
05 May 2017

Official inauguration of the Terminal in Voerde-Emmelsum 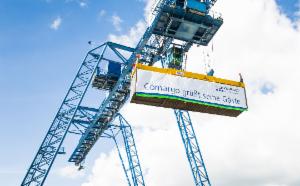 On 27 April the official opening of Contargo‘s 46,000 m2 terminal in the port of Emmelsum took place, with a trip on the vessel MS River Dream and a ceremonial “first lift”, accompanied by many good wishes from all parties concerned.

The terminal has an annual trimodal handling capacity of 60,000 TEU, a quay length of 300 metres and two sidings, each 315 metres long. Over the past few months work has been completed at the terminal on depot space for 1,400 TEU, access roads, truck and car parking spaces. A building for offices and social facilities, a maintenance and repair hall and a reefer station have also been constructed. Together with the terminal in Emmerich, the new Contargo site will operate as Contargo Rhein-Waal-Lippe GmbH.