Contargo is one of the leading, neutral service providers for container logistics in the European hinterland. With a close-knit network of its own terminals and transport lines, Contargo links the seaports in Western Europe with the European hinterland. The container specialist combines the inter-system advantages of the transport modes inland barge, rail and truck.
10 Jun 2016 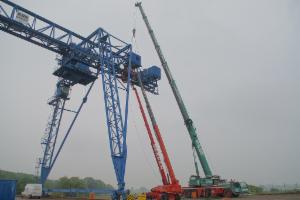 As part of the terminal development at the Emmelsum location, the crane which was already on site is being optimised for future operation. As well as replacing the portal trolley wheels, modernisation includes the retrofitting of energy-saving LED lighting, and the integration of a low-noise spreader with a weighing system in accordance with SOLAS guidelines. A major modification is the lengthening of the cantilever arm by seven metres on the land side.

Lengthening the cantilever arm will extend the crane’s working area, thus enlarging the container positioning space beneath the crane.

Last week the new, prefabricated arm component was delivered to the Emmelsum site by a heavy haulage vehicle and then fitted into place, a manoeuvre involving the use of two truck-mounted cranes. Despite difficult conditions due to the weather situation, the refitting measure was successfully carried out as planned.