Contargo is one of the leading, neutral service providers for container logistics in the European hinterland. With a close-knit network of its own terminals and transport lines, Contargo links the seaports in Western Europe with the European hinterland. The container specialist combines the inter-system advantages of the transport modes inland barge, rail and truck.
20 May 2016 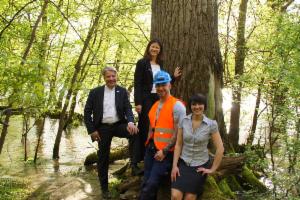 From 1 May, the container hinterland logistics network Contargo has taken up a River Sponsorship, supporting the work of NABU, the German Nature and Biodiversity Conservation Union. This is the use to which Contargo has put the 10,000 Euro prize money it received for the Eco Performance Award in 2015.

"As an intensive user of European rivers, and especially the Rhine, we have decided to invest the prize money from the Eco Performance Award in a river sponsorship”, says Heleen Scharroo, Operations Manager Contargo Waterway Logistics. “In this way we can contribute to the return of Nature, even on busy waterways. In the past, actions of NABU on the Rhine have been concerned, for instance, with creating pebble stone islands and restoring old backwaters to their natural state. Inland waterways and sustainability in one project – that’s definitely something for Contargo."

In addition to the Eco Performance Award 2015, in 2016 Contargo has been the recipient of another environment prize, the Captain Eco Award 2015. Both awards honoured the enterprise’s integrated sustainability concept. An overview of the sustainable activities of the Contargo Group can be obtained from the Sustainability Report 2014. The 2016 Report is expected to be published in summer 2016.