Contargo is one of the leading, neutral service providers for container logistics in the European hinterland. With a close-knit network of its own terminals and transport lines, Contargo links the seaports in Western Europe with the European hinterland. The container specialist combines the inter-system advantages of the transport modes inland barge, rail and truck.
11 Apr 2016

Barge record for Contargo in the Valenciennes Region 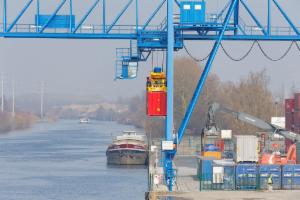 In March 2016 Contargo North France, the leading enterprise for barge transports in northern France, achieved a new monthly record for container transports by barge. The number of containers transported was up by eleven percent compared to the same period last year.

Importers and exporters in the economic region of Valenciennes are using barge transport increasingly often. The use of combined transport means that the catchment area for barge transportation extends to a radius of up to 150 kilometres, linking this region of northern France to the seaports of Antwerp, Rotterdam and Dunkirk.

Due to the big demand Contargo will be further expanding its barge lines in the near future: the connection with Antwerp will be increased from five to six round trips per week. From May 2016, the scheduled line to Rotterdam will be stepped up to two trips a week and the frequency of the Dunkirk line, newly established in 2015, will probably be doubled over the next few months to a twice-weekly schedule.