Contargo is one of the leading, neutral service providers for container logistics in the European hinterland. With a close-knit network of its own terminals and transport lines, Contargo links the seaports in Western Europe with the European hinterland. The container specialist combines the inter-system advantages of the transport modes inland barge, rail and truck.
16 Dec 2015 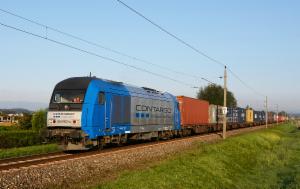 16 December 2015 - From January Contargo will be offering a direct, fixed-schedule rail connection between Neuss and Rotterdam with two round trips a week.

On 11 January 2016 the first whole train will start out from Rotterdam. Initially it will depart from Rotterdam twice a week, on Mondays and Thursdays, and on Tuesdays and Fridays it will set out from Neuss in the other direction. If there is a strong positive response, Contargo may increase the frequency to three round trips per week. In Rotterdam the train will call at the terminals APMT 1, ECT Delta and Euromax; in Neuss it will arrive and depart from Contargo’s terminal in the Flosshafenstrasse.

"With the Neuss Multimodal Express we are directly linking the Lower Rhine Region – from Duisburg to Krefeld, Düsseldorf and Mönchengladbach, to Cologne – with Europe’s biggest seaport", says Jürgen Albersmann, Managing Director of Contargo Neuss GmbH. "This rail product ideally complements our existing barge lines. Particularly in times of flooding or low water, when a reliable second possibility is needed, the new line provides an environmentally friendly alternative."