Contargo is one of the leading, neutral service providers for container logistics in the European hinterland. With a close-knit network of its own terminals and transport lines, Contargo links the seaports in Western Europe with the European hinterland. The container specialist combines the inter-system advantages of the transport modes inland barge, rail and truck.
08 Jun 2021 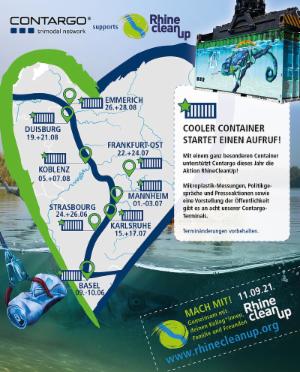 On 11 September thousands of people will be collecting rubbish along the Rhine in the RhineCleanUp initiative. To draw attention to this action, and also to environmental protection topics and climate change, Contargo has re-equipped a container and has had it decorated by a graffiti artist duo. From tomorrow, the container will be going on its travels as an information centre, starting from Basel and calling at various other Contargo locations until the action ends in Emmerich at the end of August. The aim is to reach as many people as possible on this topic and motivate them to take part in a rubbish collecting action, or even organize one themselves.

See more about this in this video.