Contargo is one of the leading, neutral service providers for container logistics in the European hinterland. With a close-knit network of its own terminals and transport lines, Contargo links the seaports in Western Europe with the European hinterland. The container specialist combines the inter-system advantages of the transport modes inland barge, rail and truck.
25 Sep 2019 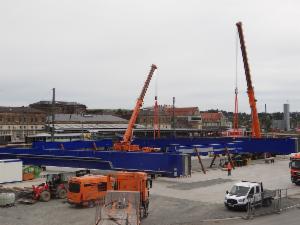 At the Freight Transport Center in Hof, previously the goods station, parts for two container cranes have been arriving since last week.

Now that the crane rails have been laid, the metal parts for the crane itself are arriving from Posnań (Poland). Initially one crane will be assembled. The parts for the second crane will be delivered at the end of October and then assembled in the period up to February 2020, depending on the winter weather conditions. Both cranes are planned to go into operation in spring 2020. Contargo Combitrac wants handling with the new container cranes to be faster, quieter and more environmentally friendly.